WEBSITE UPDATE! We have published our first scientific publication

Familiarising ourselves with the IN-HABIT case study in Bogotà

From the 8th to the 11th of August, IN-HABIT Project Coordinator Mar Delgado visited Bogotá to get some first-hand knowledge of TransMiCable at Ciudad Bolivar, the Bogotá case study led by Olga Ceballos and Juan Yunda from Pontificia Universidad Javeriana.

Ciudad Bolivar is a marginal neighbourhood built on the hilly outskirts of Bogotá. The neighbourhood used to be quite isolated, with it taking residents almost 2 hours to reach the city. However, 2018 saw the inauguration of TransMiCable, a gondola lift system that connects Ciudad Bolivar with TransMilenio*, Bogota’s bus rapid transit (BRT) system, thus reducing the travel time to 20 minutes.

TransMiCable is much more than a transport system for Ciudad Bolivar though. It defines itself as a sustainable mobility project whose aim is the social transformation of the area. In each of the four gondola stops – the so-called influence area – social and economic interventions are being boosted by 18 government institutions, with the support and involvement of the community. Several artistic areas, parks, and community services have been developed, and the areas around the stops are being transformed into colourful spaces where different local artists (such as May Rojas from Bogota Colors, or the collective Sur Vamos) are developing their work.

Economic opportunities have also emerged, such as street vendors selling coffee, shops, bakeries, small restaurants, etc. During the visit, Mar Delgado met several community leaders, who explained their experiences and the various actions they undertake to increase services and facilities in the area. She also met some of the artists who painted the murals, which are mainly based on the memories of the residents and the history of this once illegal settlement.

Another very relevant initiative included in the visit was the Museo de la Ciudad Autoconstruida, the Museum of the Self-Constructed City, built in 2021 in El Mirador del Paraíso, TransMiCable’s final stop. The museum has been designed as a space for meeting, participation, and recognition of the people and communities that have worked to strengthen the social fabric in Ciudad Bolivar. It also provides an immersive experience, offering a platform for the exchange of experiences and learning about collective actions, as well as the construction of common goods.

All these initiatives and facilities developed around TransMiCable have created an opportunity for Graffiti Tours, where local guides explain the history of the neighbourhood and earn a living.

What’s more, more than 60% of the employees of Cablemovil, the company contracted to operate and maintain TransMiCable, are from the neighbourhood, with at least 50% of them being women. The company’s social action department has a very active role in the dynamization of the area and in boosting cultural, social, and economic opportunities. They also organise events to attract Bogotá citizens to the neighbourhood and to break the stigma.

As well as learning about TransMiCable and the local initiatives, the visit was an opportunity to boost clustering opportunities with sister projects. Mar Delgado met the researchers from EuPOLIS in Bogotá (Juan Pablo Rodriguez and Juliana Uribe from the University of Los Andes) to find out about their pilot case study in Bogotá and explore synergies. And finally, she visited one of the CONEXUS intervention areas at the urban-rural area of Bogotá, with Jaime Hernández from Pontificia Universidad Javeriana de Bogotá.

* TransMilenio consists of 114.4 km of interconnected BRT lines, with raised floor stations in the centre of a main avenue, or “troncal”. Passengers typically reach the stations via bridges over the street. Usually, four lanes down the centre of the street are dedicated to bus traffic. The outer lanes allow express buses to bypass buses that are stopped at stations. 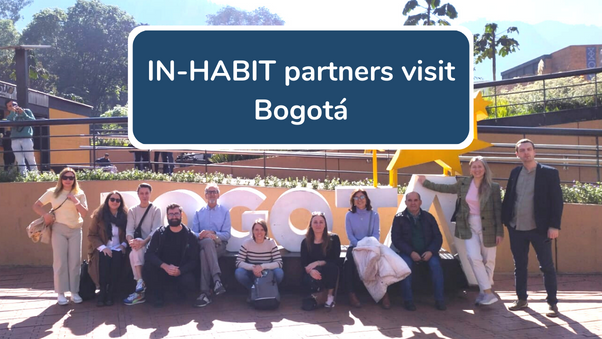 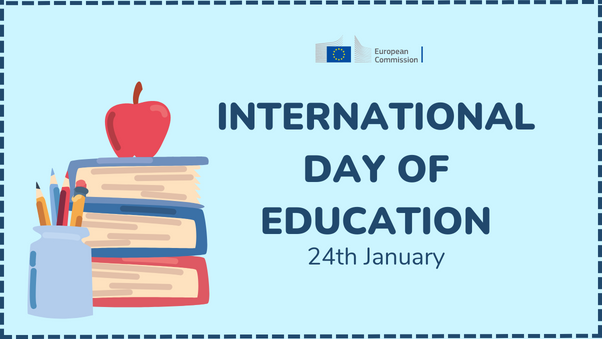 International Day of Education 2023 with IN-HABIT 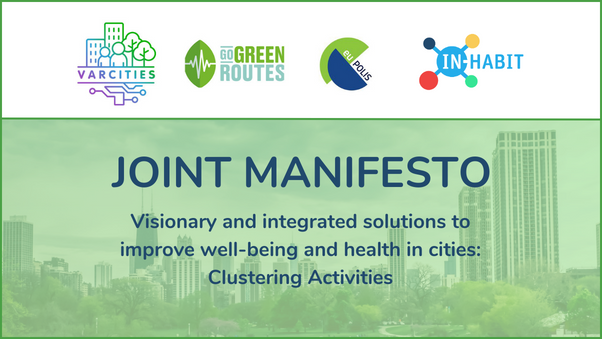 We use cookies on our website to give you the most relevant experience by remembering your preferences and repeat visits. By clicking “Accept All”, you consent to the use of ALL the cookies. However, you may visit "Cookie Settings" to provide a controlled consent.
Cookie SettingsAccept All
Manage consent

This website uses cookies to improve your experience while you navigate through the website. Out of these, the cookies that are categorized as necessary are stored on your browser as they are essential for the working of basic functionalities of the website. We also use third-party cookies that help us analyze and understand how you use this website. These cookies will be stored in your browser only with your consent. You also have the option to opt-out of these cookies. But opting out of some of these cookies may affect your browsing experience.
Necessary Always Enabled
Necessary cookies are absolutely essential for the website to function properly. These cookies ensure basic functionalities and security features of the website, anonymously.
Functional
Functional cookies help to perform certain functionalities like sharing the content of the website on social media platforms, collect feedbacks, and other third-party features.
Performance
Performance cookies are used to understand and analyze the key performance indexes of the website which helps in delivering a better user experience for the visitors.
Analytics
Analytical cookies are used to understand how visitors interact with the website. These cookies help provide information on metrics the number of visitors, bounce rate, traffic source, etc.
Advertisement
Advertisement cookies are used to provide visitors with relevant ads and marketing campaigns. These cookies track visitors across websites and collect information to provide customized ads.
Others
Other uncategorized cookies are those that are being analyzed and have not been classified into a category as yet.
SAVE & ACCEPT

Epilepsy Safe Mode
Dampens color and removes blinks
This mode enables people with epilepsy to use the website safely by eliminating the risk of seizures that result from flashing or blinking animations and risky color combinations.
Visually Impaired Mode
Improves website's visuals
This mode adjusts the website for the convenience of users with visual impairments such as Degrading Eyesight, Tunnel Vision, Cataract, Glaucoma, and others.
Cognitive Disability Mode
Helps to focus on specific content
This mode provides different assistive options to help users with cognitive impairments such as Dyslexia, Autism, CVA, and others, to focus on the essential elements of the website more easily.
ADHD Friendly Mode
Reduces distractions and improve focus
This mode helps users with ADHD and Neurodevelopmental disorders to read, browse, and focus on the main website elements more easily while significantly reducing distractions.
Blindness Mode
Allows using the site with your screen-reader
This mode configures the website to be compatible with screen-readers such as JAWS, NVDA, VoiceOver, and TalkBack. A screen-reader is software for blind users that is installed on a computer and smartphone, and websites must be compatible with it.

We firmly believe that the internet should be available and accessible to anyone, and are committed to providing a website that is accessible to the widest possible audience, regardless of circumstance and ability. To fulfill this, we aim to adhere as strictly as possible to the World Wide Web Consortium’s (W3C) Web Content Accessibility Guidelines 2.1 (WCAG 2.1) at the AA level. These guidelines explain how to make web content accessible to people with a wide array of disabilities. Complying with those guidelines helps us ensure that the website is accessible to all people: blind people, people with motor impairments, visual impairment, cognitive disabilities, and more. This website utilizes various technologies that are meant to make it as accessible as possible at all times. We utilize an accessibility interface that allows persons with specific disabilities to adjust the website’s UI (user interface) and design it to their personal needs. Additionally, the website utilizes an AI-based application that runs in the background and optimizes its accessibility level constantly. This application remediates the website’s HTML, adapts Its functionality and behavior for screen-readers used by the blind users, and for keyboard functions used by individuals with motor impairments. If you’ve found a malfunction or have ideas for improvement, we’ll be happy to hear from you. You can reach out to the website’s operators by using the following email info@inhabit-h2020.eu

Our website implements the ARIA attributes (Accessible Rich Internet Applications) technique, alongside various different behavioral changes, to ensure blind users visiting with screen-readers are able to read, comprehend, and enjoy the website’s functions. As soon as a user with a screen-reader enters your site, they immediately receive a prompt to enter the Screen-Reader Profile so they can browse and operate your site effectively. Here’s how our website covers some of the most important screen-reader requirements, alongside console screenshots of code examples:

We aim to support the widest array of browsers and assistive technologies as possible, so our users can choose the best fitting tools for them, with as few limitations as possible. Therefore, we have worked very hard to be able to support all major systems that comprise over 95% of the user market share including Google Chrome, Mozilla Firefox, Apple Safari, Opera and Microsoft Edge, JAWS and NVDA (screen readers), both for Windows and for MAC users.

Despite our very best efforts to allow anybody to adjust the website to their needs, there may still be pages or sections that are not fully accessible, are in the process of becoming accessible, or are lacking an adequate technological solution to make them accessible. Still, we are continually improving our accessibility, adding, updating and improving its options and features, and developing and adopting new technologies. All this is meant to reach the optimal level of accessibility, following technological advancements. For any assistance, please reach out to info@inhabit-h2020.eu